What Anime are you watching?

What an utterly bizarre description. The only thing YUA has in common with Patlabor is being about cops (and a slight focus on machinery, but completely different machinery), and Dirty Pair...well, there's the 'two female leads', but YUA has an extensive supporting cast, the girls aren't wearing skimpy costumes, are more or less competent, and don't have any significant yuri subtext (sadly >_>)...
I swear I will, I'll make you smile.

Agreed. Unless the movie is very different from the series.
Grand Low Maker of Mischief, Claw of Chaos, Fang of Anarchy

Kamino Neko wrote:What an utterly bizarre description. The only thing YUA has in common with Patlabor is being about cops (and a slight focus on machinery, but completely different machinery),

I can't argue with that, but it was enough to pique my interest. Also, I did say that I found that it wasn't the same as Patlabor.

I never saw much yuri subtext between Kei and Yuri, to be honest, especially since Yuri was always chasing after guys and constantly breaking up with them for various reasons. While Kei just wasn't interested in romance, one way or the other.

Bare in mind, that I'm speaking mainly of their incarnations from Dirty Pair Flash, since I haven't seen much of the original series.

That said, Miyuki and Natsumi share some similarities with them. For starters, they have a similar tomboy and girly girl buddy cop dynamic, as Kei and Yuri. And while they're certainly more competent (thank God!), they're not above engaging in juvenile anticts either; especially Natsumi.

They even have some of the same personality traits. Natsumi's tomboyish, hotblooded, and a big eater, like Kei. Miyuki is soft spoken, feminine, and has guy problems, like Yuri. The difference being, her guy problems are limited to Ken, whereas Yuri was dating everything under the sun. They even even look vaguely similar (again, talking about Dirty Pair Flash here). So I can see how the reviewer got the same vibe from them.


Azrael wrote:Agreed. Unless the movie is very different from the series.

In fact, it's the only similarity it has with Patlabor. By which, I mean that the movie is almost entirely drama and action, whereas the series itself is mostly lighthearted and comical. Much like how the Patlabor movies differ from The Mobile Police/New Files series.

Without spoiling, the movie has Miyuki and Natsumi stumble upon a hidden message that results in the Boukoto Precinct being attacked by terrorists, as seen in the link (previous post).
Top

say guys how is ISEKAI NO SEIKISI MONOGATARI (Tenchi Muyo! War on Geminar) ?

iam thinking of checking it out. The alternate mecha battle ova version of tenchi Muyo
Affro Shaman of the Forum and Deranged Elder Lynx of the Caves. Perpetuater of warm-hearted irrelevance and lynx kitteh of affectionate inflictions. 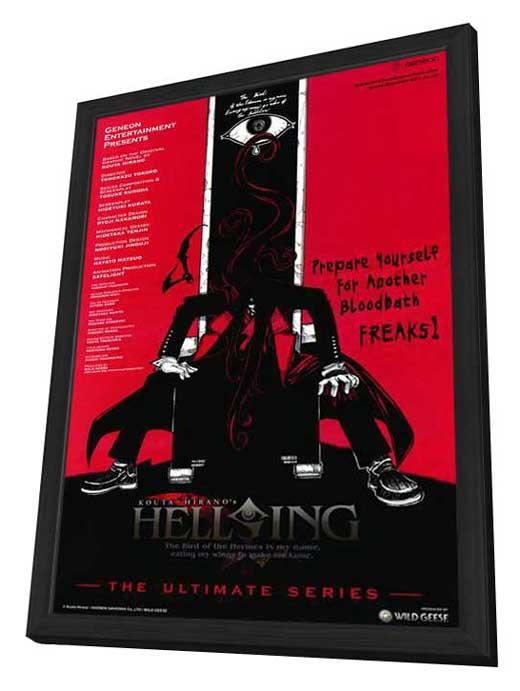 I could have done without the silly omake-like scenes. The seriousness of the first show should have been retained.

Switching from the "hole in my chest remembering my parents mutilated raped corpses" to a comedic dream scene really grates badly. The first show also always maintained its animation style, it didnt go omake like when she see's him siting by her bed when she wakes up after her turning. Integra feels less..professional and strong willed with that smirk/grin and ridiculous dialogue. Dont like Exposition being thrown at us, it can be done more naturally. Theres a slight shallowness here with the characters.

someone said the animation was better in this one? it has its weak places and good spots.When its good its better than the first show but it keeps doing that silly omake thing. Maintain the art style's integrity!

I still prefer the previous animation but if it had the grit and viciousness expressed by the good parts of the new shows animation...when it decides not to be lazy, it would have been even better.

its like they said "lets put in more adult scenes...BUUUUUT we'll put in silly immature moments too!" "lets create better animation but use it only 40% of the time" the adult scenes would have worked better with the seriousness. Lets

its a bad direction to take. If i wanted to watch "horror" type shows with omake comedy moments, i'd watch Soul Eater.

its like those sketched ending scenes in the first show with the author (the "spirit in her gun") talking to her were taken and made a part of the show itself.[/B]
instead of going "oh yeah thats a nice grope scene" instead we'd be thinking "oh christ that sick fuck, this is terrible". instead of her looking to the corner and blushing when groped, she'd be disgusted and horrified by this THING (just like when he grabbed her from behind and was telling her that he didnt want to make new vampies, now that had terror in it)


differences in handling the franchise, both the old and the new show are good in places and bad in places.i just really feel the ideal hellsing was somewhere inbetween this show and the last one.

Still though, i can enjoy the new show too.
Affro Shaman of the Forum and Deranged Elder Lynx of the Caves. Perpetuater of warm-hearted irrelevance and lynx kitteh of affectionate inflictions.

Now watching Record of Lodoss War. I've always loved a good fantasy/adventure epic, and I must say, it isn't half bad so far. I may even add it to my collection, depending on how it plays out.
Top

its a classic. all the "records" are
Affro Shaman of the Forum and Deranged Elder Lynx of the Caves. Perpetuater of warm-hearted irrelevance and lynx kitteh of affectionate inflictions.

Shingeki no Kyojin episode 5. holy hell.
Affro Shaman of the Forum and Deranged Elder Lynx of the Caves. Perpetuater of warm-hearted irrelevance and lynx kitteh of affectionate inflictions. Affro Shaman of the Forum and Deranged Elder Lynx of the Caves. Perpetuater of warm-hearted irrelevance and lynx kitteh of affectionate inflictions.

for a show about an overlord who massacred hundreds of thousands of innocent people, lost to the rebellion and group of heroes, threw himself into our world to escape (and promising a vengeful return), its quite enjoyeable.

a show is only as good as the expressions they render. {dont hold me to these words though}

and this sass expression is fucking hilarious.

Lupin the 3rd vs Canon the barba i mean Detective Conan.
Affro Shaman of the Forum and Deranged Elder Lynx of the Caves. Perpetuater of warm-hearted irrelevance and lynx kitteh of affectionate inflictions.

I have SHAT my collective britches.

Affro Shaman of the Forum and Deranged Elder Lynx of the Caves. Perpetuater of warm-hearted irrelevance and lynx kitteh of affectionate inflictions.

Since i have way to much time in the last few months i have watched alot of shows that are from manga i follow like the anime of Beelzebub witch was not bad but had to much filler episodes in it, also the end was to sudden.

I'm still watching Accel World witch really is a cool series( wicked fight scenes) and it follows its manga well.
Another serie isBoku wa Tomodachi ga Sukunai,(Hagenai,i don't have many friends on english) witch is very fun to follow(nice intro theme) and seems to follow the manga well but shows it in a much better way

still at the first season so got alot to watch :s
Another series i just started watching(after i read the manga preview) is Mayo Chiki, a fun series also getting published by Seven Seas, the best part i love about the series so far is the amazing art and the well-timed sadism

,making it a must-watch series in my book!

I got quite a collection built up over the years, and the best series i have seen so far are:
1.Hellsing Ulitmate After the dissapointing anime this OVA series follows the manga in all its bloody glory, especially the english dubbed version is the best i ever heard.
2.Bakemonogatari This series just rocks! the way everything is told as well as the characters keep it interesting and funny,just make sure u have your finger on the pause button when watching it otherwise u might miss alot.
3.Angel Beats. This serie has a interesting setting and beautyful music with a very emotional ending(made me cry sniff) making it a very good serie.
4.Hell Girl. Probably the best Horror anime out there,and it even has a live-action version!(but can't find a translated version

)
5.Nekomonogatari/Nisemonogatari. the prequel film and sequel series to Bakemonogatari, both very entertaining and interesting,especially the infamous toothbrush scene in Nisemonogatari make sure u'll remember it well!
6.Mouretsu Pirates. Aside from the stupid english title this is one of my favorite space animes with a funny story and very cool looking ships and space battles.
7.Seikon no Quaser. This eroticly charged action series is fun to watch and follows the manga for the most part.
8.Okami-san and her 7 companions.A very fun serie altrough i'd hoped they make a sequel

9.Negima! OVAs.the OVA series are probably the best one of all the Negima! anime, altrough there are so many its hard figure out sometimes.
10.Claymore.This is one of my favorite manga's atm and the anime is done good as well, even trough its only 1 season and has an alternate ending(since the manga is still running) it follows the manga well.

its not quite like i said it was. i was exagerating. its mainly slice of life with him in our world.

i found it to be al ot of fun though
Affro Shaman of the Forum and Deranged Elder Lynx of the Caves. Perpetuater of warm-hearted irrelevance and lynx kitteh of affectionate inflictions.

^^^^^ U were right Tenjen! its an amazing serie!
I'm enjoying it and i'm really suprised how well the story goes, no simple(go kill the dark lord!) but some more complicated stuff going on as well as fun side characters who also keep suprising u.
Can't wait for the next episode!!

EDIT: After i read through this entire thread, for ppl who like anime series with lots of ecchi go check out Freezing, it has the most ecchi i have seen in a long time with boobs flying loose pretty much in every fight...
And they even announced a 2nd season!
Thankfully the manga is not even close to the anime's lvl of ecchi so i suggest u read that as well if u like the story.
But if u really enjoy that kind of stuff better go watch the Queens Blade series, those really give a new definition to ecchi overkill..

To say it was originally released back in 1999, it's superior to a lot of what's released today in terms of artwork and animation. And song used during the end credits of each episode is pretty catchy (unfortunately, the credits are in Japanese, so I don't know the song's title).
Top
Post Reply
113 posts