And I loved Velvet in the first episode. And considering how her 'weapon' works, that means Port's mustache is indeed a deadly weapon.
"Don't call me a dirty old man.... Cuz I'm not old... I'm of a fine vintage..."
"Get your mind out the gutter... you're crowding me."
Top

A little Neo, in sadness, being smug, displaying snark. *spoilered for size 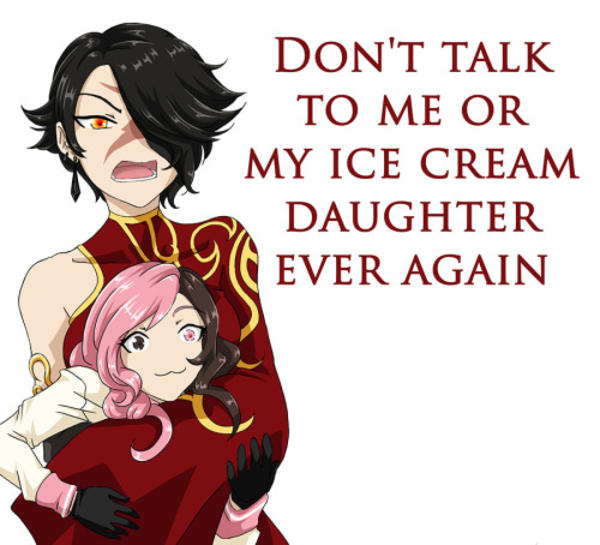 Was it ever confirmed that she's mute? Or is it still the fandom's assumption?

Until confirmed one way or the other by WOG, it's all fan assumption. That being said, given the in show evidence we have at this point, I'm fairly certain she's mute. The main reason I think this is because she didn't make any effort noises when fighting Yang. Neither did she gasp or anything of the sort when she looked startled / scared when Raven appeared. All the other characters always make effort noises during fights, whether they're attacking, getting hit, sometimes when they jump, etc. Nor did she make any reaction noise when Ruby triggered her parasol and sent her Mary Poppinsing off Torchwick's purloined Star Destroyer. Neo has made absolutely zero noise, as if she quite literally does not have a voice.

IIRC from a fairly early interview with some RT folks (one of whom was Gray Haddock) they were initially looking for a VA for Neo, so even at this late date that could all change. But I strongly suspect they chose to go with the mute angle after seeing it in action and seeing what the fans' reactions to her were. Again that too is speculation on my part. Whether any of this is germaine at all, since at this point I'm no longer sure she's ever going to show again outside Chibi, I couldn't tell you.

Dishwasher1910 did a piece portraying Jaune and all his sisters. Love the depiction: Each of Ozpin’s incarnations has its own name
Why Mercury works for Cinder isn’t a simple question to answer, but that will get explored on the show “pretty soon” (someone hold me please aaaaaaaaah)
On Qrow’s semblance: "It’s not necessarily constantly running, it’s more that it randomly spikes to cause unfortunate situations. If he chooses to amplify it in a fight, then yes, it does cost him.”
Winter was never going to be in V5 which was hinted with her “I’m not always going to be around to save you” line in the Weiss trailer
Ilia is a lesbian
Weiss and Winter are about 5-6 years apart in age
Pilot Boi was supposed to be gay, but then they got feedback from crew members that convinced them that having the first gay character die in the very next episode wasn’t a good idea (but they are actually trying to get more representation into the show and listen to feedback on that matter!)
Hazel’s semblance needs to be activated and isn’t always just there
Qrow totally is the Scarecrow
Feedback they considered when starting to write Volume 6 was that Ilia’s Arc, the Spring Maiden reveal and Cinder vs Raven went well, what they want to work on is more fights that better utilize characters’ weapons and abilities, more attention and meaningful conflicts for Ruby, Show don’t tell.
Kerry mentioned Show don’t tell once again and that they would try to work on that in Volume 6.
On Raven’s weapon: “Monty modeled her weapon in about a weekend while on a trip before animating the end fights in Vol2. She can load it with different types of dust blades for different needs/missions. In the Raven/Cinder fight, she used ice, electricity, gravity, and a regular non-dust blade. Maybe fire? Can’t remember.”
There is no such thing as being too young to be a Maiden. The unofficial cutoff point to become a Maiden is 30.
Qrow is not Ruby’s dad. She just looks up to him so much that she mimics a lot of things about him. (I know what many here are thinking about this theory, but please let’s not be a dick about it.)
On Jaune being Miles’ self insert character Kerry said: “In the first few Volumes, if Jaune was in a scene it was almost always because either Monty or myself wanted him in a scene. From the very beginning, Monty was very big on having that archetype of character be fairly prominent in the show. Miles has always been incredibly hesitant to insert Jaune into scenes, to the point where he’s voiced before that he wishes sometimes that he didn’t voice him. So, if people want to be mad at someone for Jaune being in scenes, take it out on Monty and I

”
Milles added to that: “Yeahhh, more or less what Kerry said. I won’t lie and say that I didn’t have fun getting to do lines in the booth. It’s always a pleasure to get to do more acting, especially if it’s a character that gets to do more dramatic scenes. But yeah, the accusations that Jaune was a “self-insert” really started to get to me over the years, to the point where I began actively avoiding writing scenes that had him in it. Now if I was voicing someone like Torchwick or Watts. Bro. Fuckin’ rename the show “Teenagers Get their Butts Kicked by Awesome Badguys: The Roman Torchwick Hour of Villainy - Starring, Written, and Directed by Miles ‘Loves Playing Villains’ Luna””
On a question about whether Jaune has older sisters, younger sisters or both: “You’ll find out soon enough! Winky face. Let’s say for now that he’s on the younger end.”
“RWBY does in fact have an end. We continue to stay flexible with some of the events leading up to it and exactly how long it will take us to get there, but yes, the main storyline will end one day. That being said, we think of that as an opportunity to explore other areas (or timelines) of Remnant. Much like RvB, as long as people keep watching, we will keep making. It just works a little differently.”
“There are certain moments or character arcs that we’ve wanted to do since before a single script was written (like the end of Vol3 or Ren and Nora’s backstory). There are also a lot that we come up with as we go because we had the idea later or wanted to highlight a certain character/lore element. It was very important to all three of us in the beginning to have an idea of where we were going but also stay flexible to new ideas that popped up along the way.”
Qrow’s weapon is now named Harbinger.
Kerry is most excited to explore Salem’s backstory.
Kerry’s favourite scene to write in Volume 5 was the one between Weiss and Yang.
Apparently they will launch a new side soon that might include character turnarounds and more information on birthdays and weapon names. (Link 1, Link 2)
Vernal never had a surname. She had another name, but when she decided to become the face of the Spring Maiden for Raven, she adopted the name Vernal.
On Raven possibly being on RWBY Chibi: “Have to wait and see! ;)”
"Don't call me a dirty old man.... Cuz I'm not old... I'm of a fine vintage..."
"Get your mind out the gutter... you're crowding me."
Top

Juane being Miles' Marty Stu is kind of valid after Season 4, it is one of the major reasons I cancelled my 1st membership for Rooster Teeth. It's not really his fault, it is a common failing in this industry. When you are writer/director/actor of any show, it is very hard to be objective about your character.
"Vegetarian: an old Iroquois word for Bad Hunter." Stolen from Azrael
“My books are like water, those of the great geniuses are wine. (Fortunately) everybody drinks water.” ~Samuel Langhorne Clemens
Robin Williams, a man who used his natural talents to make people smile, to laugh, to spread joy, to let everyone else feel alive; so no one else ever had to suffer as much as he has.
Top